Validity is the utility, interpretability, generalizability, and accuracy of a given measure

Validity, as a concept, has been debated greatly in the methodological and philosophical literature. In its most basic applicable form in applied psychometrics, validity is the evidence that shows that scores from a survey can be interpreted and applied in an accurate fashion within a population of interest. The process of establishing validity is an ongoing and dynamic process that never ends. Survey instruments need to be constantly revalidated and recalibrated in shifting and changing populations.

Validity is heavily grounded in empirical reasoning. The construct must be derived from a theoretical or conceptual framework within a body of literature. The evidence of validity is obtained through a tedious process of mastering the content areas related to the construct, constructing a reliable survey instrument, developing a nomological network of conceptually similar instruments, testing the instrumentation within the nomological framework, and then establishing the consequences and utility of the survey scores.

There are five types of validity evidence:

With content validity, the reasoning is that an instrument can only be interpreted if it effectively reflects the construct of interest. There are two specific threats to content validity:  Construct-irrelevant content and construct under-representation. Construct-irrelevant content is spurious or redundant items that are unrelated to the construct of interest. These items can introduce statistical "noise" into the analysis and detract from the precision and accuracy of survey scores. Construct under-representation means that specific content areas that are relevant towards measuring for the construct are not accounted for in the survey.

3.  Processes used to respond to items

The psychological, cognitive, emotional, and affective processes that respondents use to answer questions is also pertinent when assessing validity. Test instructions, the reading level of the language used in the survey, and the survey items must be written in a fashion that respondents can understand and logically respond to in the survey.

4.  Association with other scores and variables

5.  Consequences of test use and interpretation

This validity evidence focuses on the intended and unintended benefits or consequences of taking a survey, interpreting the results, and utilizing the results to make informed decisions.
Research Engineer will primarily focus on the second and fourth types of validity evidence.  Click below for the type of valid evidence that will answer the research question. 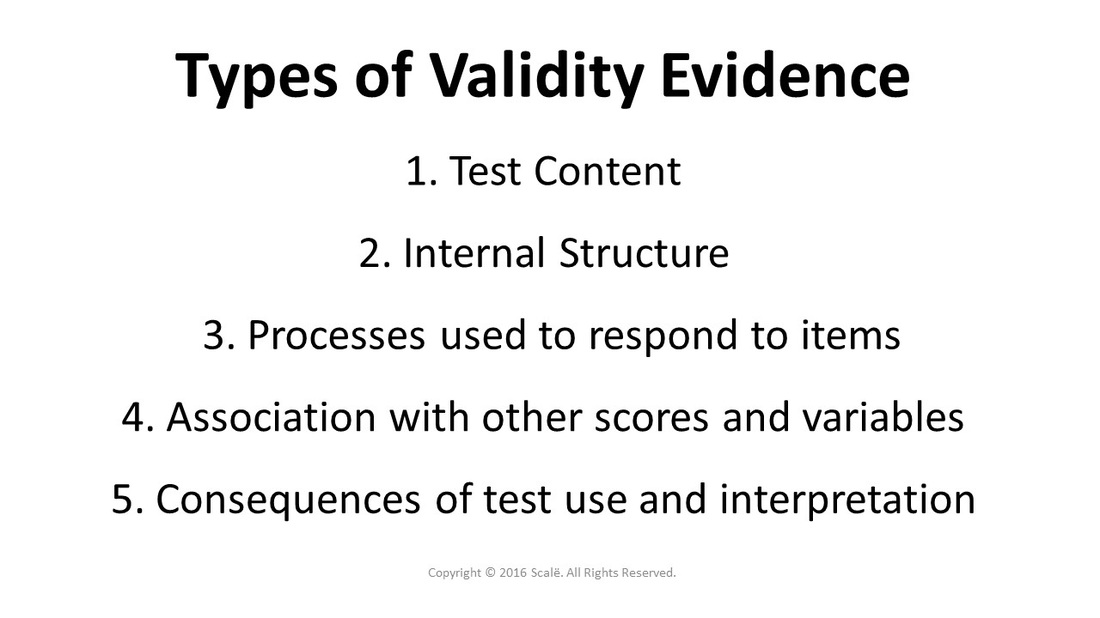