Multivariate statistics account for confounding variables and predict for outcomes

Before running any multivariate statistics, there are several tasks to complete in regards to structuring the data and the meeting of certain statistical assumptions. Let's get started!

1.  Continuous predictor variables must be normally distributed and have equal variance across the outcome. Run skewness and kurtosis statistics to assess this assumption. Equal variance or homoscedasticity will be assessed later.

The reason that researchers create one less variable than the number of levels of the categorical predictor variable is that the reference category is created by default with the non-existence, non-exposure, or lack of possessing the characteristic of all the other levels combined. If six mutually exclusive between-subjects variables are codified as 0 = NOT having the characteristic and 1 = HAVING the characteristic, then there is a chance that someone in the sample may not possess ANY of those six characteristics, and thus would be in the reference category, codified as six "0's" across the six mutually exclusive between-subjects variables.

This complexity can be readily ascertainable with a basic example of using eye color as a predictor in a study focused on eye shadow. There are blue eyes, green eyes, and brown eyes being rated. Researchers would create two mutually exclusive between-subjects variables to account for this in a multiple regression analysis (3 groups - 1 = 2 variables). Let's say blue eyes is the reference group. Researchers would code the "green eyes" variable as 0 = DOES NOT have green eyes and 1 = DOES have green eyes. Then, the "brown eyes" variable would be codified as 0 = DOES NOT have brown eyes and 1 = DOES have brown eyes. Lastly, the reference group, "blue eyes," exists by default as a rating of 0 for both "green eyes" and "brown eyes."

NOTE:  Step 2 only applies if researchers are using polychotomous variables in multiple regression. SPSS creates these categories automatically through the point-and-click interface when conducting all the other forms of multivariate analysis.

4.  Researchers must run bivariate correlations among all of the predictor variables entered into a model. This is done to ensure that the model does not possess multicollinearlity. This is the phenomenon where predictor variables are highly correlated to each other, or essentially, measuring the same thing TWICE in a model. This can artificially inflate or deflate the t-test values associated with the model.

If any pair of variables correlates at above .80, consider deleting one of the variables from the model or combining them in some fashion.

5.  Do not include any spurious variables or variables that have more than 20% missing data in their distribution. Include variables that exist in the literature and exist within a theoretical, conceptual, or physiological framework together. Include only confounding variables yielded from the literature. To achieve enough statistical power, a minimum of 20 observations of the outcome per variable should be included in the model.

Scale of measurement for the outcome in multivariate statistics 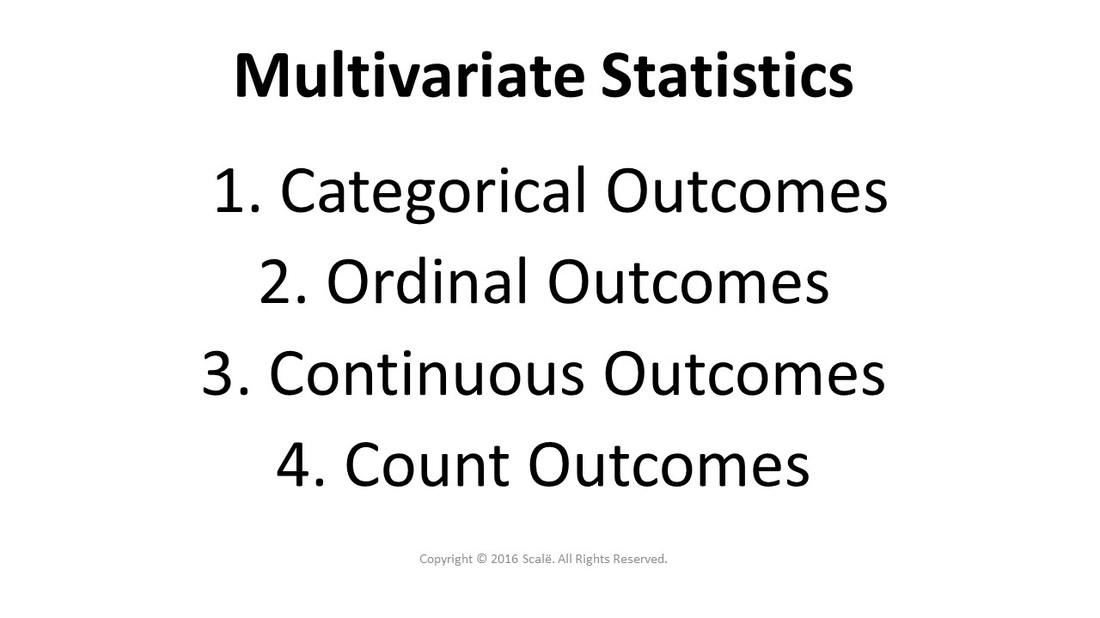