In order to run a sample size calculation for a Wilcoxon test, researchers will need to seek out evidence that provides the means and standard deviations of the outcome at two different observations. The absolute difference between the two mean values and their respective variances is an evidence-based measure of effect. Researchers should seek out articles that are conceptually or theoretically similar to the study of interest and use the values reported in the articles to calculate sample size for a Wilcoxon test.

Most ordinal outcomes are reported as medians and interquartile ranges, and those are the correct statistics for purposes of reporting in a publication.  However, when it comes to sample size calculations, researchers may be required to make an informed hypothesis based on the means and standard deviations that are reported in a published article. A good rule of thumb is to overestimate the variance of the effect size. Researchers do this because it forces them to collect more observations of the outcome, which in turn leads to more precise and accurate measures of effect.

7. Under the Parent distribution drop-down menu, select Normal, unless researchers want to change the distribution according to the current empirical or clinical context.

9. Enter the mean for the first observation into the Mean group 1 box. Example: "7.1"

10. Enter the mean for the second observation into the Mean group 2 box. Example: "4.3"

11. Enter the standard deviation associated with the mean of the first observation into the SD insert group 1 box. Example: "1.6"

12. Enter the standard deviation associated with the mean of the second observation into the SD insert group 2 box. Example: "1.1"

16. Enter ".80" into the Power (1-beta err prob) box, unless researchers want to change the power according to the current empirical or clinical context.

17. Click Calculate.
Based on the values above in the example and the 17 steps above, a two-tailed 2.8 point effect with an alpha of .05 and a power of .80 yields a needed sample size of only 5 to detect that effect.
Click on the Statistics button to continue.
Statistics
Back to Sample Size
Research Engineer Home Page 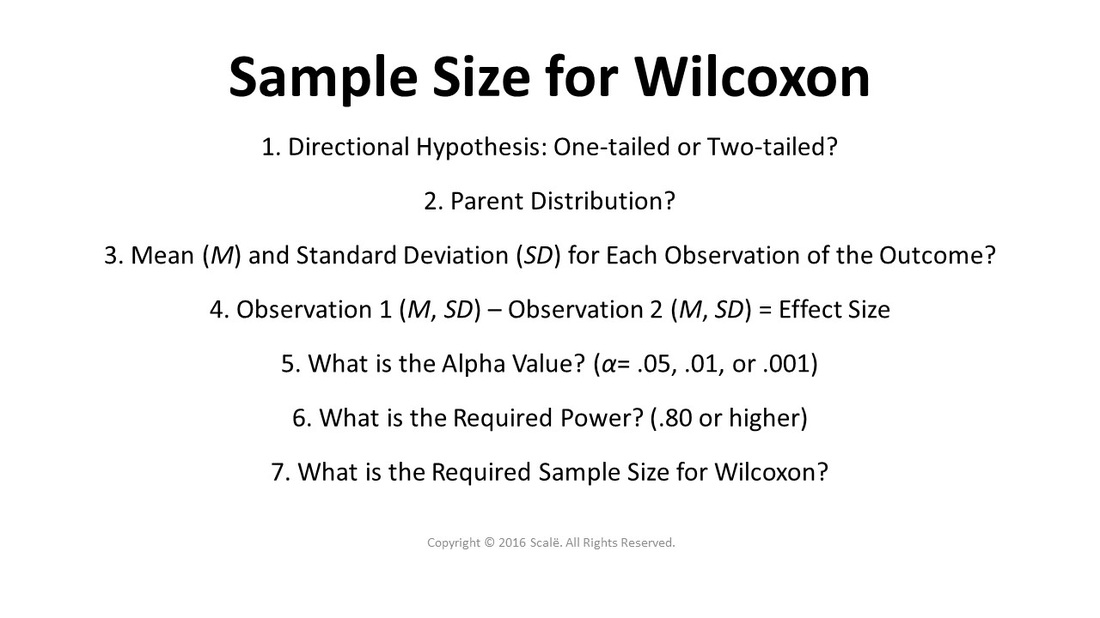