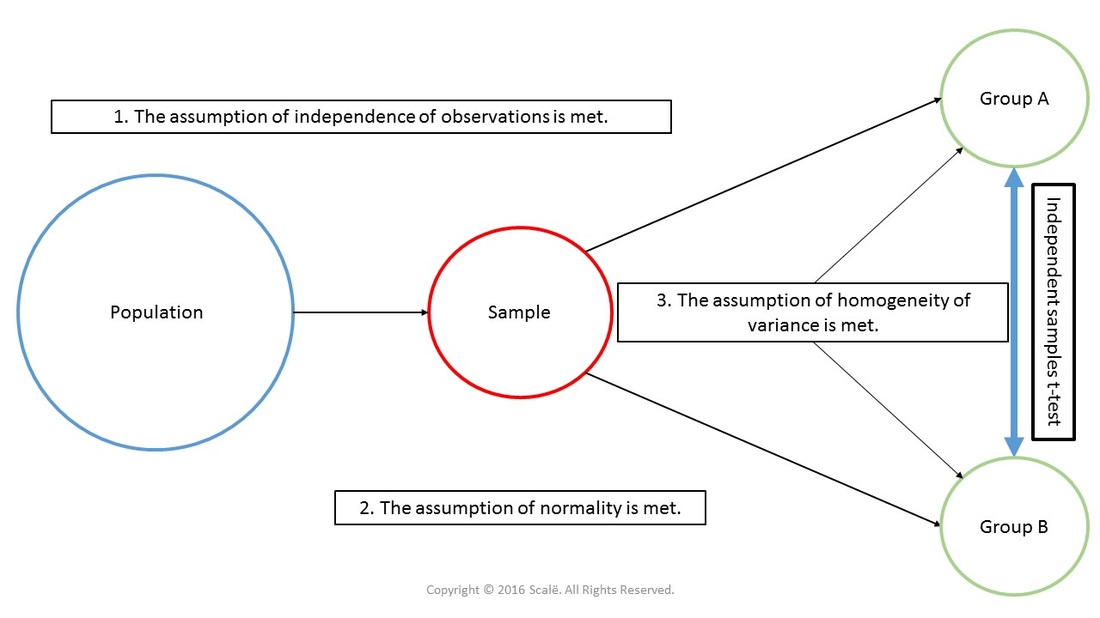 The steps for conducting an independent samples t-test in SPSS

2. Drag the cursor over the Compare Means drop-down menu.

4. Click on the continuous outcome variable to highlight it.

5. Click on the arrow to move the outcome variable into the Test Variable(s): box.

7. Click on the arrow to move the "grouping" variable into the Grouping Variable: box.

9. Enter the categorical value for the first independent group into the Group 1: box. Example: "0"

10. Enter the categorical value for the second independent group into the Group 2: box. Example: "1"

1. In the Group Statistics table, there are several important pieces of information about each independent group in the "grouping" variable including the size of each group (N) and their respective means (Mean) and standard deviations (Std. Deviation). Disregard the Std. Error Mean values for practical purposes.

2. Under the t-test for Equality of Means column heading, look at the p-value under the Sig. (2-tailed) column.

If the p-value is LESS THAN .05, then researchers have a statistically significant difference between the two independent groups on the outcome.

If the p-value is MORE THAN .05, then researchers do NOT have a statistically significant difference between the two independent groups on the outcome.

3. Look back up at the Group Statistics table. The p-value must be interpreted within the context of your means and standard deviations. For example, one would say, "There was a statistically significant difference between 'Group 1' (Mean and standard deviation) and 'Group 2' (Mean and standard deviation), p = .01."
﻿Click on the Download Database and Download Data Dictionary buttons for a pre-configured database and data dictionary for independent samples t-tests. Click on the Adjusting for Multiple Comparisons button to learn more about using Bonferroni, Tukey's HSD, and Scheffe's test. Click on the Validation of Statistical Findings button to learn more about bootstrap, split-group, and jack-knife validation methods.
Download Database
Download Data Dictionary
Adjusting for Multiple Comparisons
Validation of Statistical Findings
Back to Between-Subjects Two Groups
Research Engineer Home Page